The Castle of Good Hope is unlikely to be top of your list when visiting Cape Town.  After all, it has to compete with the mountain*, the infamous island*, the abundance of vineyards and craft breweries, beautiful nature and beaches and superb restaurants, copious shops, sunset cruises and the stunning new Museum of Contemporary African Art.  But if you have a spare half day, tucked away behind the unappealing stone walls is a fascinating attraction.

Here are 5 reasons you should visit the Castle of Good Hope:

At just over 350 years old, it is the oldest surviving building in South Africa!  The Castle’s predecessor was a fort made of clay, which needed constant repairs.  This later structure (built between 1666 and 1679) is far sounder – built with a hard shell based concrete and stone mined from Robben Island and has survived over three and a half centuries of harsh sun and wind.

2.  See a miniature canon loaded and fired in the Castle of Good Hope’s Courtyard.

On certain days (check the website for times and dates) you can watch a miniature canon being fired.  There was a short talk and we watched how the canon was loaded.  Cover your ears because it goes off with an almighty bang.

3.  Discover how Cape Town would have been in its early days.

On one side the Castle faces Strand Street (meaning Beach Street) the castle used to be by the sea, giving you an idea of how much land has been reclaimed from the cold Atlantic as Cape Town has expanded.  There are also interesting maps and paintings on display depicting life in Cape Town in the earliest days of the settlement.

Take a tour to find out all sorts of fascinating facts.  The tours leave on the hour from under the large tree in the courtyard.  See the private pool of the governor that was remodelled from oval to square.  See the bricks that aren’t bricks but teak wood installed to absorb the clatter of horse shoes ringing.

5.  Touch the past in the Castle of Good Hope’s Prison Cells.

My favourite part of the castle were the prison doors which were graffitied by inmates in bygone centuries and have been beautifully preserved. 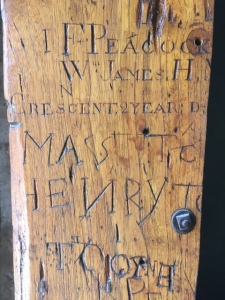 There are separate tours down into the tunnels which were once canals.  I understand these are run independently of the Castle.  Our guide told us there are rats and creepy crawlies down there so you should wear closed toed shoes.  The website I found appears to say the underground tours are currently unavailable but that above ground tours are, please correct or update me if you discover otherwise.

If you are planning a visit the Castle of Good Hope, please visit their website for up to date information on opening times and pricing.

*Just in case you’re not familiar with Cape Town – THE mountain is Table Mountain, the iconic flat topped mountain that embraces the city that has mushroomed at its base.  THE infamous island is Robben Island where Nelson Mandela was held for 18 of the 27 years he spent behind bars.

Other Posts about Cape Town and Surrounds

Visit the nearby coastal town of Hermanus to go whale watching.  Head to Franschhoek, a charming village surrounded by vineyards.  Decide whether my theory that Beau Constantia is Santa Claus’ secret hideaway holds any water.  Plan an itinerary covering 48 hours in and around Cape Town, Part One and Part Two or what to do if you have 36 Hours in Cape Town.