Visit Cape Town: We saw scary squirrels, survived a zombie apocalypse and experienced credit card fraud. Seriously though, there is so much to see and do in the Mother City, you’ll be spoiled for choice… Here’s how we spent 36 hours in Cape Town.

In the heart of the old town there are some pretty buildings, some of the oldest in South Africa. If you squint a bit you could almost be in Amsterdam. There aren’t any canals though, they’ve long been paved over, which is kind of sad.

The nice thing about Cape Town (compared to Jo’burg) is that it’s more safely and easily navigated on foot. You still have to be vigilant though.  There are plenty of homeless people and pickpockets looking for easy targets. I watched one tramp stealing sugar sachets from a street side café. I’m pretty sure the staff knew what he was doing. It was obvious and it was tragic.  Nobody was going to call the police for sugar sachet theft.

We ambled around after a lazy breakfast nosing in shop windows and watching the street vendors at work, without any concrete plans for the morning. We walked past the Slave Lodge museum and wandered in for half an hour or so. It’s not a top attraction, but was interesting historical building, which at one point served as South Africa’s Supreme Court.  It currently houses an eclectic range of displays, including an History of Slavery one (which was expected) and other surprising displays such as Ceramics and erm, Egyptology?!

By a stroke of luck, we stumbled across the tiny, quirky Mozart Café, just as the children were hitting their morning’s sightseeing limit. An empty table for four, in the otherwise packed out eatery beckoned to us.

The food was delicious and the service outstanding. Pickle had an obsession with butternut soup.  But butternut soup wasn’t on the menu. The waiter patiently convinced him that the Leek and Potato soup was a fabulous alternative. Pickle was still reluctant. “Why don’t I bring you a little taster?” the waiter persisted. Pickle agreed. The taster was delicious and the rest of us had soup envy despite our own delicious choices.

After lunch we were heading back towards our hotel, entirely minding our own business, when we were trapped in a doorway by a terrifying river of zombies.

Watch out if you’re in Cape Town this weekend, the Zombie Walk is an annual Halloween event and the participants take their costumes and scare tactics very seriously.

Click here to find out how to join/avoid this year’s Cape Town zombie walk if you’re going to be there on Saturday 31st!

Having escaped from the Zombie Apocalypse, we nipped to Bo Kaap, Cape Town’s Malay quarter. It’s famed for its pretty houses, neat and square, the houses are painted in a rainbow of zesty tropical brights. 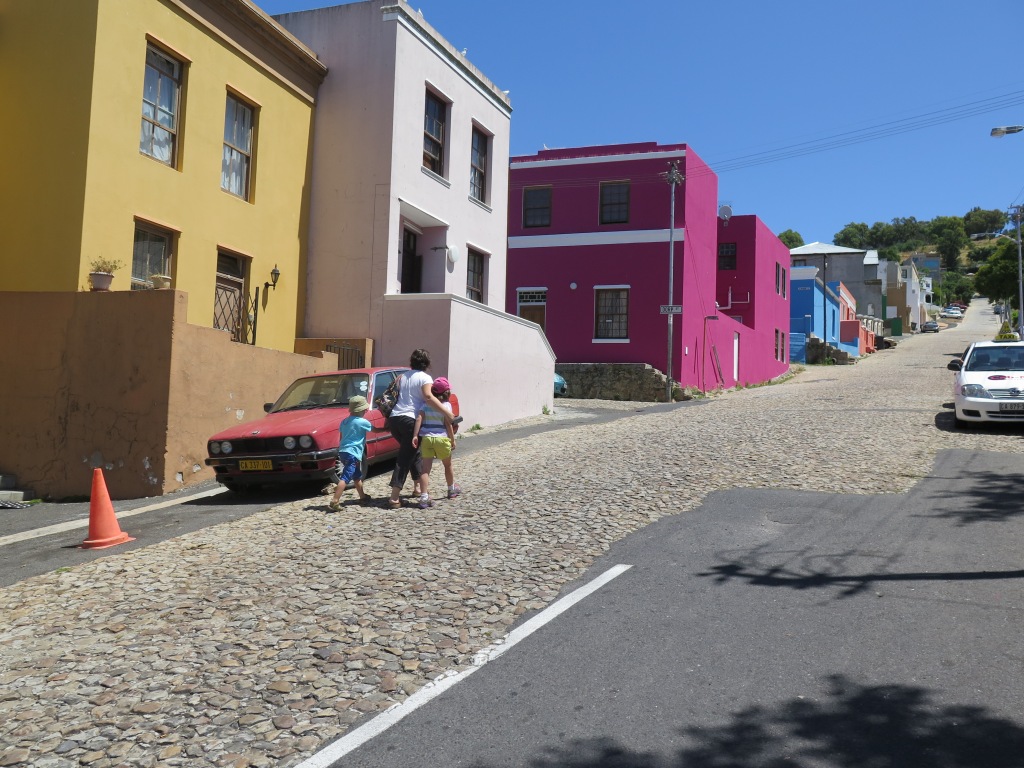 Helpfully, Mr Incredible was on hand to prevent photographic disaster.

I had the camera on the black and white setting.

Which is not very helpful when you are trying to capture those beautiful bright colours.

We finished up the afternoon down at the Waterfront. It’s a vast and fairly new shopping/eating/tourist haven.

We did a little bit of shopping.  We bought some table mats (oh yes, we know how to have fun on holiday). We later discovered that a mystery shopper had meanwhile treated themselves to a gigantic supermarket spree courtesy of one of our credit cards!

Other than shopping, there are restaurants a plenty and this is the place to come to catch a boat.  There are fishing boats, pirate ships and return ferry trips to Robben Island.

When looking out to sea from Cape Town, Robben Island is the bump you’ll spot on the horizon.  It’s where Nelson Mandela and his contemporaries spent most of their cold and windswept incarceration.  It’s one of Cape Town’s big ticket attractions.

If you are planning to go to Robben Island, it’s advisable to pre book tickets, which you can do HERE. We didn’t go this time. Our weekend away was very spur of the moment, so we hadn’t booked in advance.

Instead we went for the ice-cream and play area option and then embarked on a sunset cruise.

We saw dolphins jumping in the bay.

We admired Table Mountain from a different vantage point.

We enjoyed the sunset.

The kids were thrilled to be allowed to climb all over the boat.  Sweetpea was a windswept sea nymph, mostly perched on the most daring extremity of the boat and Pickle spent about half the cruise in the bathroom.

Nope, it wasn’t the leek and potato soup coming back to haunt him, it was utter fascination at the pump action toilet.

Sunday morning we took a stroll through Company’s Garden, which dates back to the time of the first Dutch settlers. It’s pretty, but early in the morning it’s populated by homeless people, rubbish and scary squirrels, which is a shame.

….and finally…before whizzing back to Jozi on an early afternoon flight, we headed to Camps Bay beach for paddling and sand frolicking.  We also squeezed in a spot of lunch at a pleasant restaurant called Paranga.  It’s on Camps Bay’s promenade, so it’s a great spot for people watching if you can get a table close to the entrance.

This was a fairly spontaneous, last minute trip.  We didn’t have a plan of action and we’re aware that there’s plenty more to see and do (Robben Island, Two Oceans Aquarium, Red Top Bus Tour, hiking trails, more lovely restaurants etc etc etc) in and around Cape Town. We’re planning to go back soon.  The travel opportunities in southern Africa are amazing and that’s one of the (many) reasons we count ourselves fortunate to be living here.

What’s your top recommendation for our next trip to Cape Town?

2 thoughts on “How to Spend 36 Hours IN Cape Town”