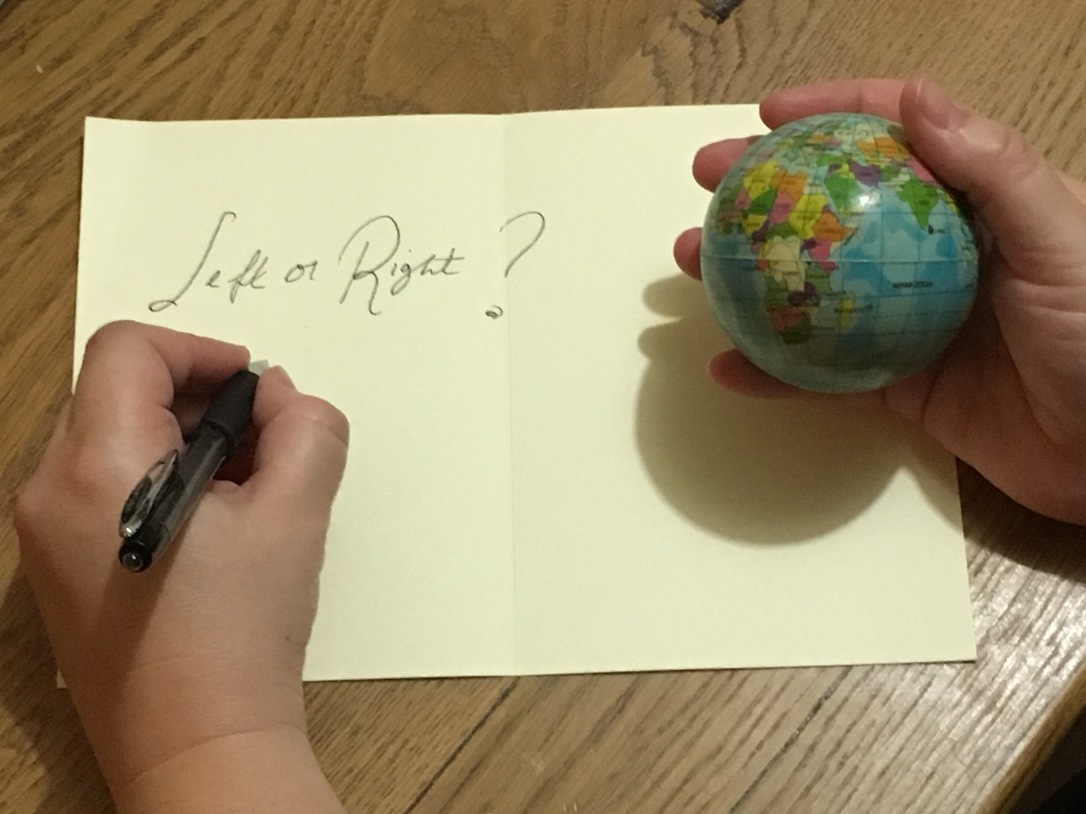 I’d forgotten that being left handed was a thing, but recently I have been reminded once again that left-handers are navigating a right handed world.

Growing up sometimes being left-handed was irritating or inconvenient.  There were the  almost permanent ink stains on my left hand from smudging my school work.  People would laugh at me crawling around underneath my work desk so that I could move my phone to the right of my computer leaving my left hand free to hold a pen, the zips on crossbody bags zip the wrong way and those awful desks some schools and universities provide with the desk to one side, almost exclusively to the right meaning you have to balance paper on your lap or sit awkwardly twisted and scrunched-up not facing the front of class so that you can write legibly are a joke.

In my lifetime alone, there have been many small improvements in the lives of left-handers.  In modern day UK banks now often attach those funny little pens on chains both sides of the booths and if you ask they will provide you with a left handed cheque book.   Scissors and many other everyday items designed for left handers are now reasonably easy to come by (see the links at the bottom of the post).

Additionally, in places like my home country (the UK) the social stigma felt by earlier generations (my grandfather could produce identical signatures with either hand and signed left-handed in private and right-handed in public and – true story – a family friend had their left hand tied behind their back at school forcing them to write with their right hand) seem to have pretty much disappeared.

Negative words such as cack-handed, sinister and being left-footed all linger in our language though and refer originally to left handers.  In fact in many languages the word for right has positive connotations, whereas the word for left often has negative origins.

Cack-handed in particular means being awkward and is derived from times where a left-hander had no choice but to use right handed tools and therefore made a botch job of whatever they were doing.  Can/tin openers, secateurs, tape measures, pencil sharpeners, power tools, musical instruments, sports equipment and many other things are designed with righthanders in mind and can be more difficult for left handed people to use easily.  Sometimes (e.g. using power tools or machinery designed for a right-hander) using right-handed equipment can range from dangerous to deadly.

If you’re right-handed and haven’t got a clue what I’m talking about, try cutting out a simple shape with left-handed scissors.  Go on, try it.  See what a pigs’ ear you make of it and how ridiculously hopelessly right-handed you are.

So left-handedness and the inconveniences that go with it is not something I’d given too much thought to for a long time…….until now….moving around the world I’ve been reminded again that being a lefty isn’t always so straightforward.

With roman letters it’s easy enough to tilt your paper to the right (whereas right handed writers tilt it to the left), keeping your writing neat. By writing with your hand under your handwriting, you can minimise, or even avoid, smudging your work.

There are a number of letters that you adapt as a lefty so that you are pulling the pencil across your body rather than pushing it away, which is a faster and more natural movement. We cross our T’s right to left, rather than left to right for example.  The pen moves more smoothly.

However, our children are now learning Mandarin. One of them is left-handed.  My understanding (and please correct me if I’m wrong) is that there is a set stroke order for authoring the characters forcing left handed writers to awkwardly push their pen rather than the easier pulling motion.  Not only is it awkward, it means your hand is often covering the character that you are writing so you can’t really see what you’re doing.  It’s just something that that particular child is having to suck up and adapt to.

Moving countries you encounter different attitudes and approaches to left handedness. There are still countries and cultures where the left hand is considered dirty and taboo as it is traditionally used for bathroom ablutions whereas the right hand is used for eating.  Touching food or sometimes passing items or pointing with the left hand can be insulting.  Although we always aim to respect local customs, pointing, for example, can be subconscious action.

Another interesting thought that occurred is the cultural conundrum of using the right hand instead of the left.  When travelling in certain parts of the world, proffering the left hand is an insult.  However, talking to a few lefties it turns out that they naturally perform certain ablutions using their right hands, so, which hand should they use to shake hands?  The ‘clean’ right hand which is actually ‘dirty’ or the perceived ‘dirty’ hand which is actually ‘clean’???  I’ll leave you to chew on that.

How Many Left Handed People are there?

Left-handers are thought to make up somewhere between 7-12% of the world’s population. If you think @10% is a small number, not worth bothering about, then just remember that it’s over half a billion people worldwide. That’s a lot of people who experience anything from minor inconveniences to social and cultural stigma.  There may be additional ‘hidden left-handers’.  These are people who had a natural tendency to use the left hand, but have been forced instead to use their right hands.  I understand there are still corners of the world where this happens, where parents and schools attempt to convert left-handed children to using their right hand.

If you’re a lefty or the parent of a lefty and need some resources (or didn’t know you needed some resources until you read this, but want to learn how you can help your child), here are just a few left-handed websites from around the globe offering writing implements, pencil sharpeners, can/tin openers, scissors, knives, cork screws and more, all designed with the left handed person in mind.  Please let me know if you know of any companies in other countries that should be added to this list.

…and one final random thought……although we live in a world geared to right-handers, perhaps, just perhaps as left-handers we are marginally better suited to expat life than all those right handers out there?  After all, expat life necessitates adapting to situations that are foreign and don’t come naturally to us and a lifetime of left-handed ‘struggles’ however minor may have given us a slight competitive edge when it comes to international relocation having spent our entire lives adapting and finding creative solutions to problems of handedness from a very young age.  A possible silver lining for all those left-handed expats out there navigating this right-handed world. 😉 What do you reckon?

Keep up to date with Expatorama by liking the Facebook Page.  If you know any left handers who would appreciate this post why don’t you share it with them?  Thanks so much.

4 thoughts on “Being Left-handed in a Right-Handed World”