South Africa is, depending on one’s point of view, either blessed or infested with an astonishing variety of arachnids.  At least 2000 different types have been recorded.

So, in addition our other wildlife encounters here: (Pickle being pinned to a rock by a lion cub, snake infested garages, snakes that are in fact not snakes but hoses, electric fences, various stinging critters and some of the lovely birds we see in our garden and the dragon….), I’d like to introduce you to two of our occasional arachnid house guests and an outdoor spider who can rival Rumplestiltskin with her ability to spin a golden thread.

At bedtime I always do an eye sweep of the rooms – ceilings, walls, floor, shake the duvets, rustle the curtains.  Mr Incredible thinks I’m nuts and yet I know that I am the lucky one nominated to banish any type of arachnid intruder.  I would rather size up my opponent from the safest possible distance rather than come unexpectedly eye-ball to eight-eyeballs with one.

The Button Spider a.k.a. The Widow Spider

The Button Spider is fairly small and (according to Gareth the Gas Man, who came to inspect our outdoor gas cylinders), the lean-to in which our cylinders are housed is exactly the kind of dark quiet place that the button spider likes to set up home.  He explained this with a nervous edge to his voice as he gingerly moved the canisters about. The male Button Spider is harmless, the female not so much.

Her other, better-known, name is the Widow Spider.  She is shiny jet black, with a red cross on her fat bustle of a bottom and her third set of legs is shorter that the others.  On the plus side, this means she is very easy to spot, identify and evict.  The minus is her tiny, yet explosively neurotoxic, bite.  The result is an array of delightful symptoms including intense pain, profuse sweating, muscle cramps, weakness in legs, elevated blood pressure etc.*

The Rain Spider is an eight-legged weather vane.  Generally they appear just before or during a downpour, although the one that kindly posed for the attached pictures must have been defective as it appeared during a dry spell.  They look like a typical nightmare hand-span sized spider more in keeping with their other name, The Huntsman.

Although they are fast and will bite, their venom is apparently relatively un-worrisome, comparable to a bee sting.  Once I’d photographed this one from a safe distance I then asked our gardener to make it disappear. 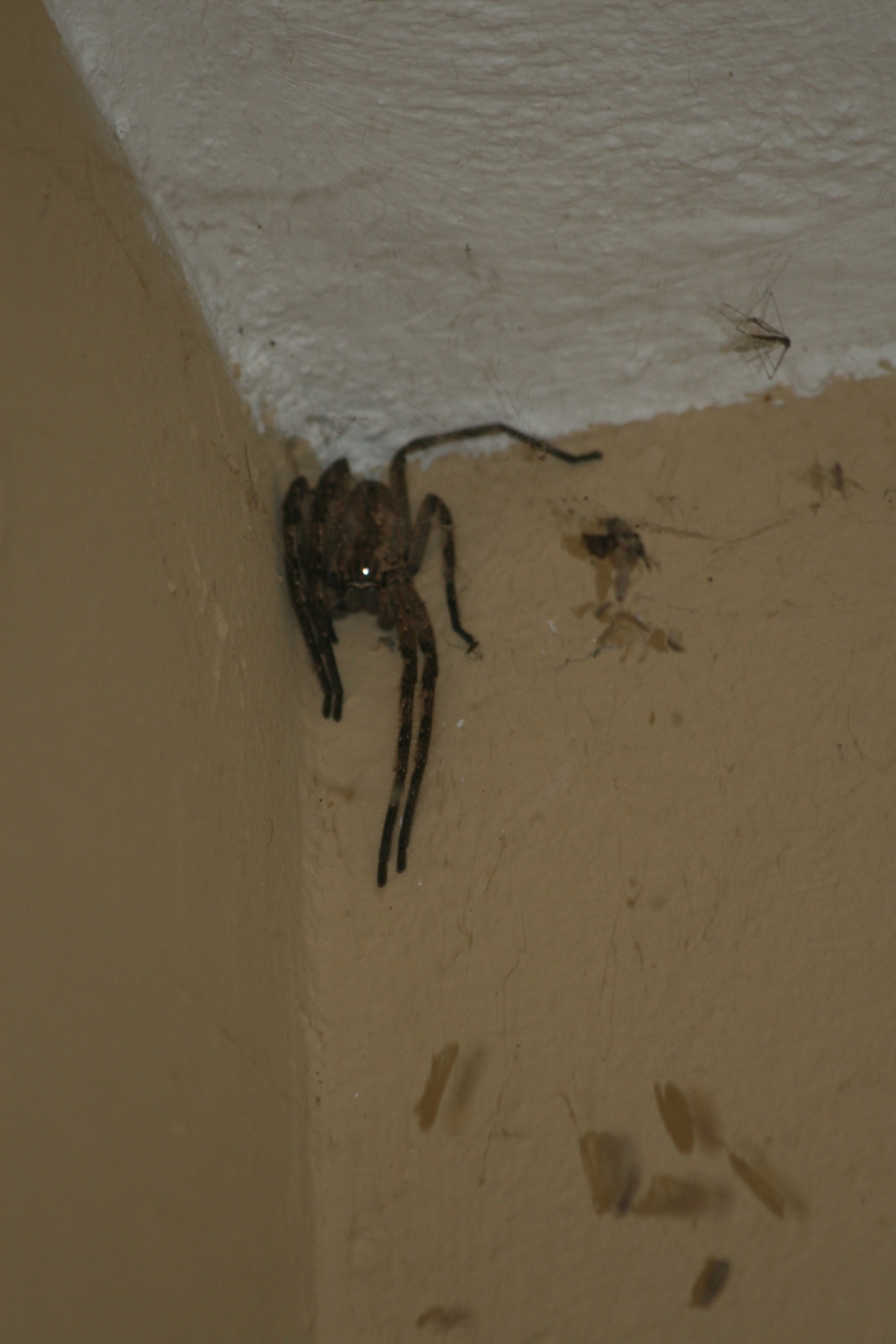 “Oh, Mummy”, he said, “I found a snake under the bin this morning.  Must I call you to shoot it if I find another?”  I took me a moment to realise he was asking whether I would like to take pictures of offending creatures rather than actually gunning them down.

I am at the same time a tiny bit disappointed and completely thrilled that he has found no further wildlife for me to ”shoot”.  As an aside, I was also slightly taken aback the first time he called me ‘Mummy’, but this appears to be a fairly standard form of address.

“MUMMY”, screeched Sweetpea, “WATCH OUT FOR THE GIANT SPIIIIIDER”. “Calm down Sweets.  What spider, where?  Is it actually quite small?” I replied, almost walking face first into a nightmarish vast web defended by a fiendishly large spider. 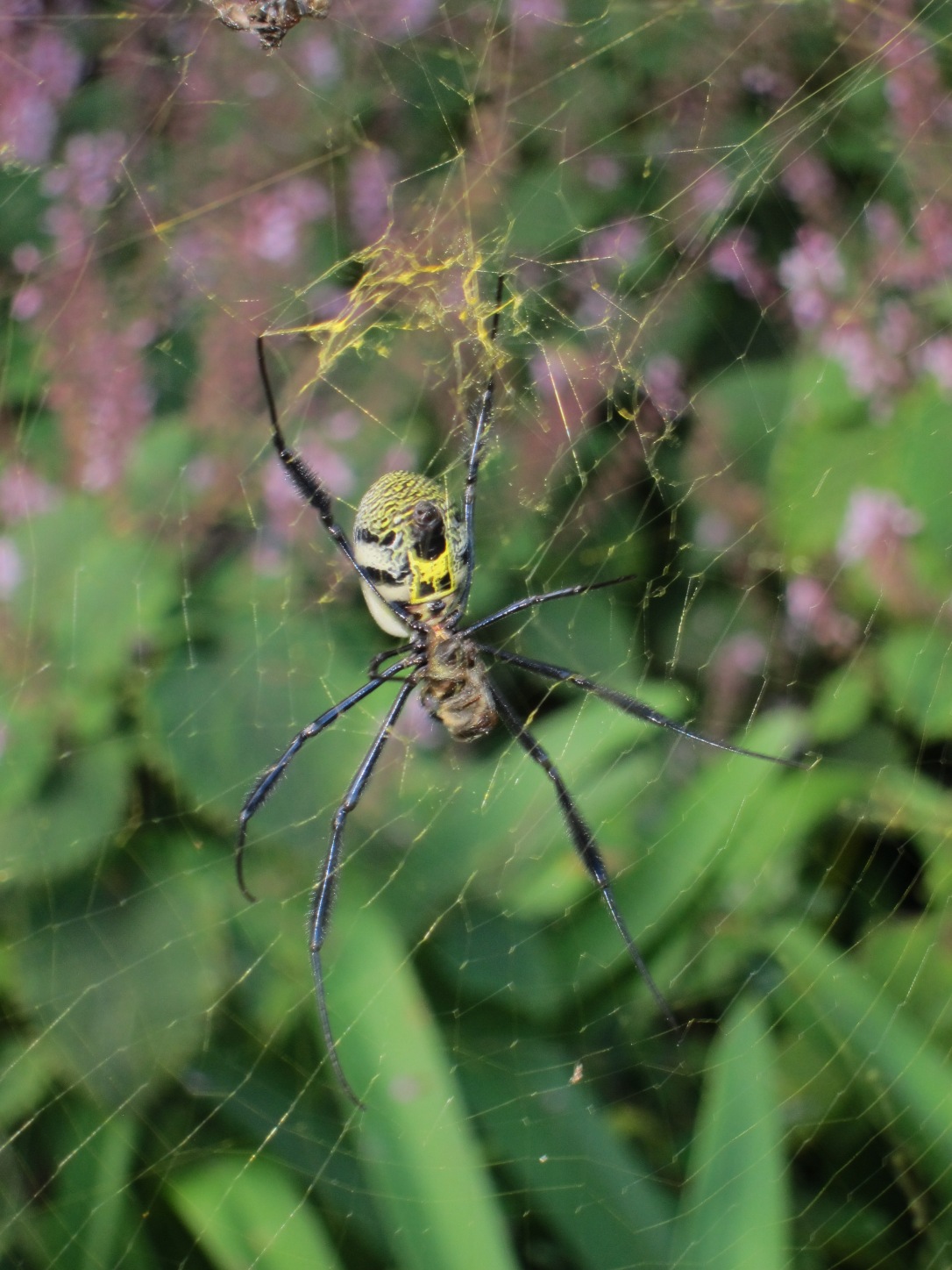 Meet The Golden Orb Spider.  She, (again it is the female that is so fearsome), looks terrifying.  She has a large alien bluey-black and yellow body and spins otherworldly golden webs.  Happily she is apparently non-aggressive and harmless.  (As an aside, please read about this Amazing Cape made from the silk of 1.2 million Golden Orb Spiders in Madagascar.)

Like the Button Spider, the female Orb would seemingly be inclined to eat her mate, but he’s quite clever and uses a tactic most parents frequently employ with their children.  It’s called distraction.  He wraps up a tasty morsel, which keeps her busy while he…..gets busy.

Much as I would love to give you an accurate idea of the scale of these various spindly spiders, this would require me getting close enough to put a ruler, hand, foot, face or unwitting small child in the photos.  Not on your nelly.  When it comes to spiders I’m with Little Miss Muffet.

*The female Button Spider venom is considered medically significant – seek immediate medical attention if you she bites you!

2 thoughts on “South African Spiders: Cute as a Button Spider”