In Istanbul Easter eggs weren’t widely available as it’s not too widely celebrated there and here in South Africa you’ve got to be quick or there won’t be any left. The early bird catches the worm and South Africans are early birds, this applies to peak times at the gym, booking of holidays far in advance and all seasonal purchases (Christmas, Easter etc).

Eggs in general are pretty awesome. They can be boiled, scrambled, poached or fried. Sunny side up or easy over. What’s your favourite and how are they cooked wherever in the world you are? Years ago, somewhere in Vietnam I visited a park with natural hot springs. Part of the tourist draw was buying an egg and lowering it into the hot spring via a little basket on a string to cook and then eat it. 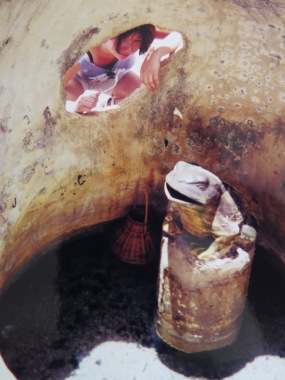 There was also an experimental bbq’ed egg once at a family gathering, we just wanted to see what would happen. It exploded a little bit. Apparently the Elizabethans used to spit roast them to similar effect.

In Lagos eggs and egg cartons didn’t have Best Before Dates stamped on them, but just before we left there was an effort by Fortuna Eggs to protect the egg buyers of Lagos from buying dodgy eggs. A sticky label was stuck over the carton opening stating:  OPEN HERE      CONSUMER ALERT!!! DESTROY THIS CONTAINER AFTER USE, TO PREVENT REUSE BY DUBIOUS PEOPLE. 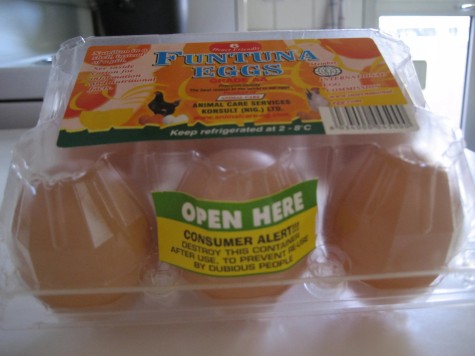 Mr Incredible once received an ostrich egg as a gift in Nigeria. It arrived in a beautiful gift box. We’d never seen one before and spent some time trying to work out what it was. Was it real or ornamental? Were we supposed to display it? Eat it? Sit on it and wait for it to hatch? We had visions of a baby crocodile hatching during the night and running amok in our apartment.

After inquiring the following morning with the gentleman who had gifted the egg, it turned out it was an ostrich egg, which was to be cooked and eaten. An Ostrich egg is equivalent to approximately 24 chicken eggs and takes quite some scrambling and quite some eating. The only eggs I’m planning on eating today though are of the chocolate variety.

1 thought on “Let’s Talk about Eggs”