Years ago I remember a South African friend waxing lyrical about the amazing potatoes in Nigeria. At the time I thought it was a bit odd. They were perfectly nice potatoes, but nothing to write home about, (and yet ironically here I am writing about Lagos potatoes a decade or so later).

Potatoes in the UK

Back in the UK we have racks and racks of the things to choose from, handily labelled to guide you towards the ideal ones for roasting or baking, mashing, or chipping. Or, for the reluctant cooks (comme moi) the bags with multi-purpose potatoes. King Edward Potatoes for example with their fluffy texture are great for roasting, mashing or chipping and would be my store cupboard potato of choice.

But, if I really fancy a big stodgy baked potato on a cold winters night, I would buy a giant, solid baking potato the size of my two fists. It would bake in the oven and it would come out soft in the middle and beautifully crisp on the outside, the crunchy skin being the best bit.  In the summer I’d buy bite sized crisp new potatoes, perfect for a zesty potato salad on a balmy day.

Potatoes, spuds or tatties, according to Love Potatoes, there are some 80 varieties grown commercially in the UK.

Now that we live in South Africa that long ago comment makes total sense. I buy potatoes most weeks and am faced with the expansive selection, an exhausting choice between medium potatoes….or….large potatoes. They are a very so-so potato specimen. They do the job, but without the tiniest bit of panache and a slightly disappointing fally-aparty texture.

I’m belatedly realising that the potatoes in Lagos were sort of pretty great after all. You don’t know what you’ve got until its gone. 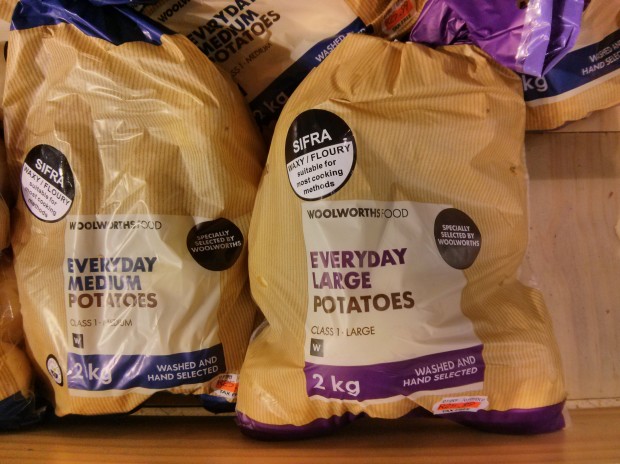